The first book I wrote was a thriller called Pay Off.  I sent it to half a dozen publishers and two - Collins and Macmillan - asked me in for a chat about it. I ended up being published by Collins and I began my career as a professional novelist.  The original cover was very simple - a shotgun with a couple of cartridges next to a glass of whisky. They are now collector's items as it was a very short print run, but by the age of 30 I was Stephen Leather, published author.  It would be another four years before I would be Stephen Leather, full-time author.  Writing is a craft that has to be learned, and just because your first book is published doesn't mean you have what it takes to make a living from it.  The sale of Pay Off was just a small step in my publishing career, though obviously a step in the right direction! 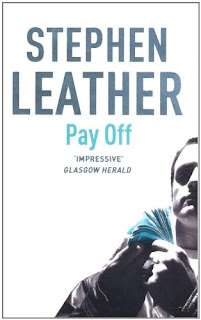 Years later, Hodder and Stoughton republished Pay Off and it still sells well, especially as an eBook.  It has dated a little (I did write it almost 30 years ago!) but it's still, in my humble opinion, a good fast-paced read.  Every now and again I think about updating it.  It's on my to-do list!

Posted by Stephen Leather at 11:53 PM