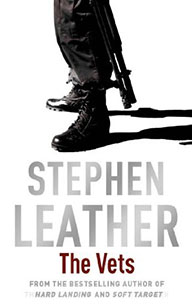 I think it's one of my best plots and suffers a bit from the title.  The Vets conjures up images of the Vietnam War or animal doctors in Yorkshire whereas it is actually a heist story, with a group of former soldiers being recruited to rob the racetrack in Hong Kong.
Posted by Stephen Leather at 1:51 PM